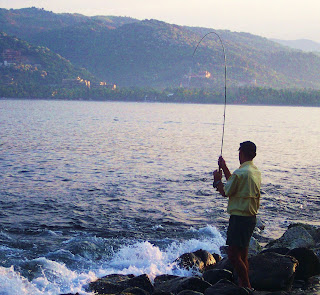 Fishing Report courtesy of Tom Wenrich
I went to Las Gatas this morning with fellow condo owner Rob Feldmannd an avid fly fisherman. He had fly fished the bay several times without success, so I took him to one of my favorite locations,the point at Las Gatas, and we caught several fish. Ron returned to Z last weekend and wanted to fly fish Las Gatas again. We got out early (6 am at Gaviota), and hiked the South Shore trail to Owen' Lee’s nature preserve and fished the rocky point in front of Owens’s palapa. Rob was knocked down by a wave on the earlier trip, but today the waves cooperated.  I caught a small cabria (sea bass) on the first cast. The next cast brought a good sized jack. The next, a larger cabria, I believe I brought to hand 5 or six more jacks and cabria before Rob got geared up and finally wet his line We both caught several more fish before the sun hit the water bringing a halt to the action.  Just as we were going to start back, I landed another nice jack though the entire point was by then bathed in bright sunshine. We fished several areas of shaded water on the trail back to La Ropa. Rob got a nice needle maybe two feet long and I landed couple of small cabria .The only thing missing today was you, Doug. Wish you could have been there.
Tom Wenrich March19, 2010


Thanks for the fine report, Tom,
expect to be fishing LasGatas
Doug
ads4 ads5
↑↑↑
OPEN