"Your first fish from the wheelchair, senor!" 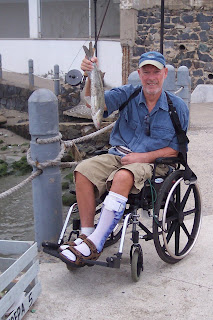 April 28th
This morning’s fly fishing action along the walkway on Playa la Madera was my second wheelchair fishing adventure since my brief experience casting from the Municipal Pier on April 20. (I did not catch anything on that first trip.)
My good friend Sergio, my wife Denise, and I arrived on the Playa la Madera walkway just as a promising red dawn drifted up from behind the Sierra Madres. A cool breeze rustled the coco palms. Stirred by the breeze, the surface of the bay seemed like tinfoil that was once rolled into a ball and then smoothed and  re-flattened. Warm surf lapped the empty beach.
Sergio and I were here specifically to catch a Robalo (Roh-BAH-lo), or as this species is called stateside, snook.
Although no reports had yet surfaced that schools of this perennial early spring fish had yet entered the bay, local fishing buddy Sergio, my guide to all things Mexican, had mentioned that he had seen Gregorio, the local King of Snook Fishers, casting a hand-line from the walkway only yesterday. It being the time of year that snook are likely to enter the bay, we deduced that the cagey
King Gregorio might be onto something. (For more information about how Gregorio catches snook and for particulars about the species, please see my June-July postings below.)
These over-achieving fish can reach forty pounds and after hooked, generally charge out to sea like a Mac truck leaving a stop sign. More and more speed and then overwhelming line and gear-busting power, so we came prepared. Sergio, a recent convert to fly fishing, brought along his newly acquired #9 Redfield flyrod with floating line.I chose a #9 too, a Sage rigged with an intermediate sink line. Both of us started with well-sharpened tan-back #6 Clousers.
We had preselected our fishing site; the jogging turnaround just south of Rana Rene’s restaurant owing to the three snook I had caught at this location last season.
Miracle of miracles, my third cast found my fly sunk into the jaw of a feisty snook! I attempted to play the rocketing fish, but the concrete posts that support the rope railings along the walkway soon erased any thought of my subduing the leaping fish while I remained in the wheelchair. Sergio tried to keep me abreast of the action by maneuvering the chair around the posts, but I soon handed off the rod, and he expertly led the fish through the surf and rocky off-shore terrain that adjoins the walkway at this location.
The snook was so excited  that under the low-tide conditions of the moment, the fish seemed to be jumping from rock to rock, touching water only occasionally. Sergio finally subdued the energetic rock hopper and brought it onto the beach.Sergio climbed back onto the walkway and rushed over to shake hands, and exclaimed in a joyous bellow, "Your first fish from the wheelchair, senor!"and plopped the quivering snook into my lap.
Denise had jogged down the beach with Luz, our smart-as-a-whip dog and Dog,Shehad heard our excited whooping, and high-tailed it back to the wheelchair. Camera in hand and grinning like a jack-o'-lantern, she began furiously snapping pictures. Even now, a day after the event, she says my face still holds the same smile that are in those photos.
Sergio and I each hefted the brawler and pronounced the weight at  2 to 3 pounds. Sergio took the catch home to his wife, Lucy and she used the leaping torpedo as centerpiece for a fine fish dinner. Sergio later reported that his four-year-old son Jordan gobbled a full one-quarter share of this most delicious of bay denizens. Catch and release just does not apply when family nutrition is at stake!