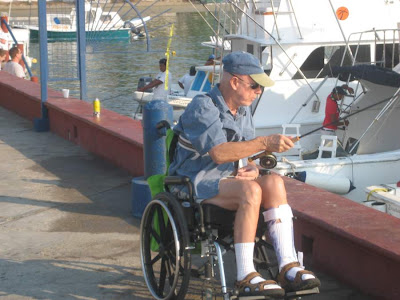 Throughout my stay at Good Samaritan Hospital in Phoenix, Arizona, my thoughts seldom strayed from our hoped-for return to Zihuatanejo, Mexico, a paradise we have called home these last seven years. While in the hospital, I wore a ball cap with the town’s name printed above the bill. Scores of staff and patients asked for the proper pronunciation and of the town’s location and more to the point, many asked why we had moved to Zihuatanejo. I explained that Denise had always wanted to live in Mexico and why not begin when she turned fifty! So when her birthday rolled around for the fiftieth time, we found ourselves living comfortably in a little pink bungalow with a view of Zihuatanejo Bay and the Pacific Ocean.


How could we have known then that a doctor in our adopted town would five years later discover a growth on my brain, later diagnosed as GBM, a brain cancer, or that Denise, the wonder-woman whom these past twenty-nine years was the warm and languid breeze beneath my ever-expansive wings, must now wrestle with the everyday reality of a wheelchair-bound husband? Gone for good perhaps are the dreamy, romantic images of walking the beaches of Zihuatanejo hand-in-hand bathed by the orange glow of a Pacific sunset and perhaps too, our hoped-for travel plans to Brazil, Argentina, and Chile. But Denise somehow was able to jettison these and other dreams and instead, commit her energies exclusively to my needs. This switch of focus, this new journey together, was not easy for either of us. disliked having to ask for help with life’s most mundane and personal chores, andthat Denise must respond to such requests. This abrupt switch from healthy, beach-walking fly-fisher to a wheelchair-bound husband was fraught with boiling emotion and frustration.


While I was in hospital, Denise joined my physical and mental rehabilitation classes and learned of the demanding role of chair pusher, and soon she knew as much about my physical abilities and inabilities as me. She rededicated herself to my goals and dreams, that I would walk again, and perhaps even fly-fish again, knowing full well that these goals were easily dreamed, but perhaps not so easily accomplished, so I am happy to state that the path to my being a fly-fisher again has shortened with this exploratory experience at Zihuatanejo's Municipal Pier. A first step to be sure, but a step forward, nonetheless.


This first attempt to fly-fish from my wheelchair was as expected, not easy, but perhaps after a bit more practice and equiptment, the goal seems achievable.


The major problem associated with this outing was not casting the line but retrieving or swimming the fly. My preferred method of retrieve requires two hands, primarily to get the extra speed I believe necessary for attracting maximum attention from predator fish. After a successful cast to an area likely to contain fish, I like to tuck the fly rod and reel under my right arm and by means of both hands, haul the line in using short, fast pulls, one hand after another beginning with a right hand grab of the line just below the first line-guide followed by a left hand grab of the same line length. Each grab and pull result in spasms of the fly, the kind of motion one might attribute to a fleeing minnow. The underwater appearance, I believe imparts a familiar scene to predator fish—a crippled minnow attempting a speedy escape. To enhance the crippled effect, when tying the fly, I like to place a half-inch length of red feather just beneath the head that perhaps imitates bit of blood or an open wound. I place the red feather on almost all the flies I tie. I adopted this technique after observing a school of 2-4 pound jacks slice and dice a school of two-inch long anchovies, leaving dozens of wounded minnows skittering the surface. Almost every wounded anchovy was immediately attacked by a jack. Many anchovies were so panicked they jumped clear of the water to avoid the furious attack of the jacks.To enhance the attention grabbing skittering effect, I often raise the rod tip a bit during the retrieve to get the fly to skate the surface and break surface tension. If predator fish are in the vicinity, this skating technique can prove enormously effective in attracting fish.


To make this preferred retrieve work from the wheelchair, I willed my hands to grab the line in a way that I thought might result in suitable action, but my left hand, still partially paralyzed from the removal of the tumor would not grab the line quickly nor securely, resulting in a very poor appearing retrieve that imitated nothing so much as a one-armed fly-fisher using a two-handed retrieve! Worse, the retrieved line caught on all manner of protrusions affixed to the wheel chair--brake handles, foot rests, push handles, etc. This problem will soon be corrected by use of a plastic basket strapped across my lap into which I will drop the retrieved line. Readers will note from the photo above that I was fishing from a pier as opposed to selected water that might actually contain a few fish! I chose this location for safety(no way the wheelchair can roll into the water) as well as a favorable back cast environment, More to come on wheelchair fly-fishing soon.