It's Over For Now 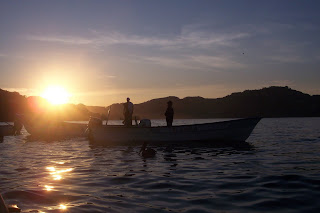 DECEMBER 7.
It seemed that the exciting jack fishing might go on forever, but survey trips with Sergio in a 12 foot skiff accompanied by anglers Stuart Nagel December 3th, and David Lewis December 6th,  garnered only a few small cabrilla. A shore fishing trip to Las Gatas December 5 with Stuart and his wife Barbara, saw a few needle fish chasing the fly and Barbara caught a small but mighty jack on her spinning rod and  small spoon(okay,so there was one jack left, That same dayI managed to bring to hand one fat Pargo on a Clouser fished close tothe bottom just off shore from Owen Lee'srecently reopened Nature Center on the point just West of PlayaLas Gatas 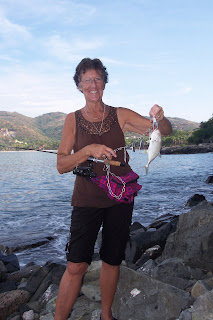 It didn't take long for the word to get out that the jacks likely have left the bay. Popular fishing locations along the north side of the bay are empty as a ghost town . The reason for the abrupt cutoff might be that most of the bait-fish that drew the jacks into the bayin the first place have been consumed and the jacks have simply left the bay to seek out greener pastures, andof course the fishing pressure has been tremendous for weeks, so perhaps most of the jacks have already been caught. It is likely that thousands of fish have graced local dinner tables since the frantic pursuit of jacks by crowds of excited anglers began in mid august. Whatever the reason,according to reports, angling for sailfish and Dorado out in the big sea remain excellent, but jack fishing in the bay has fallen off a cliff. This doesn't mean you should leave your 6, 7, or 8 fly-rod at home, though thebig jacks may be in short supply, juvenile jacks are found in many locations around thebay as are needle fish, sea bass, and,through a bit scarce at the moment, sierra, (spanish mackerel) should be present throughout the winter directly off Playa Municipal.