Three Men in a Boat

Dooglas Playa    12/02/2009    Douglas Playa    Comment
YOUR LINK IS ALMOST READY
ads1 ads2
ads3
December 4.
Sergio would rather fish than eat. He is expert at casting the hand line, throwing the net, reading the water, playing the fish, and rigging live bait. Indeed, he daily provides a fine catch that his wife Lucy turns into tasty, nutritious meals for Sergio, their three-year-old son Jordon, and herself. 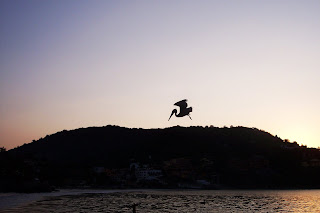 Who better than Sergio then, to join Tom Wenrich and myself for a few hours of early morning fishing aboard a 12-foot boat in Zihuatanejo Bay? Tom and I met Sergio at the Playa Municipal fish market at 7 am. Sergio brought hand lines, net, and paddle; Tom and I brought fly rods. (For more of Tom’s fly fishing exploits on the bay, please see the November 6 posting.)


Dawn had just thrown a silver sheen across the eastern horizon. Boats of the local commercial fishing fleet were rocketing into the bay after a night on the big sea. Sleek, twenty-three foot pangas zipped out of the dawn, 75-horsepower motors throttled to the max, motorman standing in the stern, crew hunched low. At the correct moment, the motorman shuts off the outboard and heaves the prop out of the water. One after another the long narrow boats shoot bare hulled onto the sand and come to a abrupt halt. The commotion of these groundings, combined with the sudden arrival of a crowd of eager fish shoppers from homes and restaurants, set off a flurry of activity. 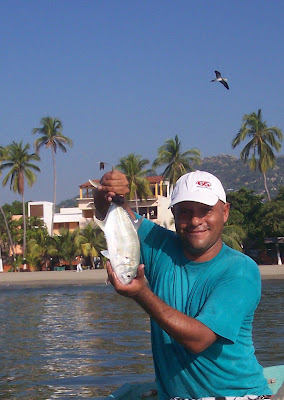 Tom and I, rods and rucksacks in hand, squeezed through the crowd behind Sergio who carried a white plastic gear bucket brimming with tackle. We emerged from the crowded market onto the beach in front of a 12-foot row boat, tossed our gear aboard and pushed the sturdy craft down the sloping beach into gentle warm  surf. Tom and I clambered aboard, sat center and  bow and Sergio gave the stern a mighty push, leaped over the transom, grabbed up the paddle, and we were off. Tom and I imediatly cast number 4 tan-backed Clouser flies overboard while Sergio paddled toward the rocky breakwater that juts from the north side of the bay entrance.
Nothing hit the trolled Clousers, but right after anchoring near the lee side of the breakwater, Tom, casting toward the jetty, almost bouncing the Clouser off the rocks, and pulling spaced retrieves, hooked a pair of jacks one after the other. Sergio caught a jack on a chunk of anchovy attached to one of two bait lines he had placed on each side of the stern. I had a couple of hits but nothing to show for it but a small cabrilla.

As the horizon brightened, the bay reflected a silver polish exposing our flies for what they really are: deer hair, thread, tinsel, and feathers. The surface action stopped. We upped anchor and Sergio paddled to a position opposite the walkway near the canal mouth. Lots of shore anglers were tossing anchovy baited hand lines from shore to the area right in front of our boat. Sergio conversed across a few hundred feet of water with his amigos fishing from the rocks and walkway. Taunts and jokes flew about like sea birds. 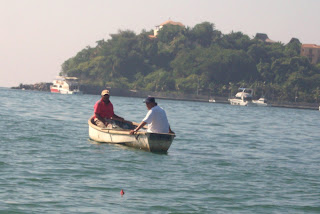 Sergio moved us well out of range of the salavos ofsilvery anchovy cast toward us by the shore anglers.We threw out the anchor in ten feet of water and settled down to await the action. Tom and I cast Clouser flies, pausing to allow the weight of the fly and the sinking lines to get them down to the gloomy deep where the imitations might pass as crippled minnows, then we began rhythmically pulling the flies back toward the boat . Sergio soon picked up another nice fat silvery jack on one of his hand lines positioned just off the bottom. Tom hooked the wing of a low flying albatross on a back cast, not an uncommon event when saltwater fishing, and quickly reeled the distressed bird in toward the boat. Sergio grabbed the tross just below the head to avoid the snapping beak, removed the barb-less hook, and the bird went back airborne .
The sun had come up and we were feeling the heat. Tom and I kept casting the Clousers. Several other small boats holding two or three anglers each were close by, but we saw no action from them or from the shore fishers. Sergio occasionally pulled upone of his  hand lines to check the bait. The sun began to crisp our ears. Tom and I applied sun block and adjusted the bills of our ball caps. 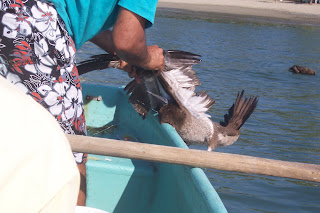 Tom made a long sweet cast and began the retrive. His rod came down hard on the gunnel. Line shot off the Orvis reel as if connected to a speeding train, running out so fast out of the tiptop guide that  Tom could not get the rod up. Even a second handhold above the rod handle would not do the job. Seconds later, the shrieking Orvis went silent. The line fell slack. I won’t write what Tom said as he reeled in the limp line. We were expecting a cut-off fly, but were surprised to see that the Clouser was still attached to the fifteen pound tippet. The number 4 Mustad hook was bent straight as a sewing needle.
Sergio grinned, shrugged. “A very big jack, I think.”
Tom kept shaking his head and muttering while searching out a new fly from the box.
Suddenly the boat rocked. Sergio had stood up on the stern seat.
“Anyone want a soft drink or bottled water?”
Because I had planned to be on the water only a few hours this morning, I had not brought water.I hadn’t seen Sergio  bring any water aboard either, but I was thirsty. “Water sounds good,”I said.
“I got water in my pack, thanks anyway, Sergio,” said Tom.
Sergio pulled off his T-shirt, tossed it on the seat, and executed a fair dive into the brine. He surfaced and began a furious  breast stroke toward shore.
“Don’t forget to watch my lines,” he yelled over his shoulder.
Several of the shore fishers hooted and hollered at Sergio’s abandoning ship.
“Where is he going?” asked Tom.
“Beats me.”
We watched Sergio swim a ruler-straight course toward shore. He emerged from the salt, jogged barefoot up the beach and then along the cobbled street toward Nardo’s tienda. Minutes later, he was back on the street running hard. He plunged into the surf. In minutes his hands gripped the transom, and he heaved himself aboard.
Cold bottled water never tasted so good.
We were soon underway toward the rocky cliffs north of Playa La Ropa. Sergio paddled with such authority the craft seemed powered by a motor rather than a very long  handled paddle. 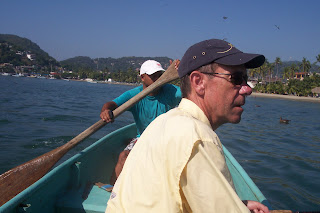 On the way across, Tom and I dropped number 2 Clousers tied on nickel hooks over the side—no more straightening of the hooks! I had switched to the chartreuse color, reportedly the favorite of Bob Clouser, inventor of the fly that carries his name. (http://www.clouserflyfishing.com/)
Now it was my turn to get the big hit. The number 8 rod bowed and throbbed like a live thing, whipped down hard, came up a bit and then down hard again, and there it stayed, a repeat of what Tom had experienced. Line shot out through the guides, the reel screamed, but this time when the line came limp and I reeled in; the fly had been neatly clipped from the tippet.
“Maybe a big jack or else a grouper,” said Sergio, his trademark grin blowing away all disappointment. By this time, the sun was full on the water, the heat rising quickly. Tom and I called it a day although Sergio was fully ready to continue.
We had missed a couple of big opportunities, but a pleasant morning on the water and fish in the catch box for Sergio made up for that. Besides, there would be many days ahead to cast our flies over the scenic waters of Zihuatanejo Bay.
ads4 ads5
↑↑↑
OPEN