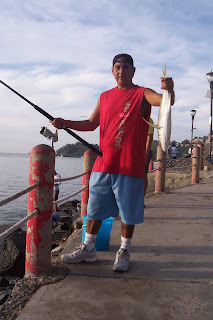 November 24. One and two pound jack Crevelle  (jurel pronounced who-rel) began showing in August, and by September these small, but mighty scrappers were everywhere in the bay. The la Ropa rocks produced jacks on flies on many a morning, and Playa Las Gatas in front of Owen Lee's Preserve produced a fair amount on the fly too. And the finicky south shore often erupted with attacking jacks not thirty feet from the rocky shore at first light.

But no place in the bay has held the endless schools of these small, hard fighting jacks like the area between Playa Municipal and Playa la Madera. Hundreds of local anglers have collectively caught many thousands of fish in a relentless pursuit that has lasted three months, driven as much by the need to supplement family diets in hard times as the simple, age-old quiet pleasure of fishing.
Last week, a few larger jacks were caught by boaters not far off shore. This week, the bay in front of Playa Municipal exploded with five to eight pound jacks. Untold scores of the tall platinum brawlers charged out of the depths right in front of delighted shore fishers this morning. At one point, it seemed Mr. Jacuzzi had installed one of his machines in front of fisherman's point on the Paseo del Pescador. The big jacks blew up the calm surface like war movie machine guns, slicing and dicing schools of anchovies and any other small fish unlucky enough to be in the vicinity.

At times, the big jacks drove anchovies against shore so hard, the wet slapping and flutter of thousands of silvery bodies leaping against the shore rocks competed with the crashing sound of surf.

Dozens of anglers went home this morning with a prize that will likely feed the whole family tonight and then some.