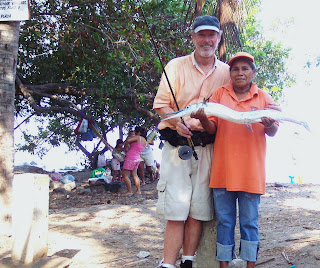 Needlefish don't always get much respect from sport fly-fishers, but locals love the sleek, bone riddled fish. It makes darn tasty soup.
However, a fly-fisher angling by boat just outside the break and hoping for a feisty rooster or big jack, often finds that dozens of needles have crashed the party. These fast, sleek bait thieves slash through the carefully laid plans of the boat captain trying to tease a big rooster fish close in so that a fly-fisher client can get at it. Big needles attack swift and sure, gobbling the baits, teasers, and flies too, but hooking one of these torpedos is not easy.The hook often bounces off the long, bony mouth like a Ping-Pong ball off a wall, sometimes bending or snapping off the hook point. Saltwater fly-fishers that I know figure that for every twenty or so hits from needles, just one is a hookup. They say dream on if you believe you can do better than that. This may seem like slim pickings but consider that needlefish travel in schools and those twenty hits can occur inside of five minutes.
Pound for pound, needles hit as hard as most any sport fish, and if you actually do get the hook into one, these circus acrobats they take to the air like rainbow trout and often run away so fast you think bonefish! A big needle is one of the most exciting fish in the bay to play from shore.
The local woman in the photo above saw me make the rare connection, and when I didn't lose the frenzied, leaping needle in the first few minutes, she apparently thought I had a chance of landing itand she risked scrambling down a high bank and teetering out onto mossy rocks to give a hand with the beaching. Her reward?  Lots of fish soup for sure.
ads4 ads5
↑↑↑
OPEN