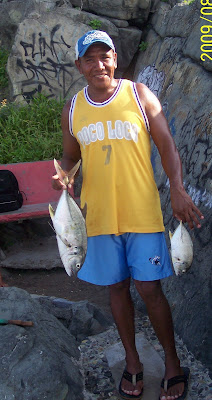 On the tails of snook that arrived in the bay this summer, now come the jack crevalle, called jurel (who-rel) by local anglers. The catching seems all along the north shore from the far end of Playa la Madera to Playa Municipal. Fish weights I've seen vary widely, perhaps between one and four pounds. As is usual with jacks, just about any bucktail or deceiver fly pattern will do the trick, but rapid retrieval of my favorite, a Joe Brook's platinum blond bucktail with tan back works best for me. If the jacks are chasing bait on the surface, I make the cast and then immediately begin a fast retrieve causing the imitation minnow to speed along just beneath the surface. You can't retrieve the fly too fast for a jack. If the fish are not showing on the surface, I allow the fly to sink a bit, expermenting with different depths of one to four feet, and then begin the retrieve. I keep the rod tip pointed at the fly at all times for the most certain hookup. I released three fish of about two to three pounds right after first light this morning, and then a couple of smaller fish after changing locations. Missed hookups accounted for another half dozen hits. By 9 AM, the jacks had gone deep and the excitement over. A dozen or so local anglers tossing handlines had similar action. Martino, the happy fisher with dinner in hand (photo above) caught the largest fish I saw this morning. His lure was homemade, a weighted fly similar to the fly tied by Gregorio in the article below - The King of the Snook Fishers.