After the Storm, Jacks Still Hitting 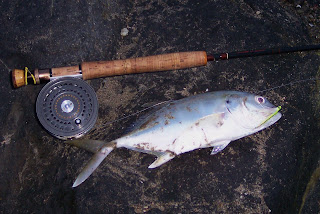 This past week furious thunderstorms carried across the bay. One tempest set fire to a three-story bayside hotel destroying the palapa roof and damaging the top floor. Serious lightning, thunder, and rain bombarded the town for hours causing heavy runoff into the bay from the canal and surrounding hills. Playa la Madera and Playa Municipal were so dirty I stuck my hand into the water but could not see the tips of my fingers. Visability at Play la Ropa and south shore was better, perhaps a few feet. Several days later, the bay still murky, I determined to throw a few casts from the rocks at the north end of Playa la Ropa. Juvenile jacks and cabrilla, and mid-size needlefish are a staple at this location. Unless there is cloud cover, this area is generally productive for only about thirty minutes after first light, and then the action falls off a cliff.
Offsetting this disappointment, I often catch something on the first cast or two, and this morning was no exception. I tied on a highly visible white deceiver with lots of flash and a touch of chartreuse bucktail, made a single cast, and began a speedy retrieve; a determined jack grabbed on and bounded off toward Hawaii!
I am regularly amazed at the aggressive power of the jack crevalle. Many, many times, right after the unmistakable and powerful strike of a jack, I mentally and physically prepare for a big fish. I tick off in my mind the locations of line-snagging underwater rocks and glance about for the best place to land the brawler. I twist the brake a click or two tighter and carefully pay out line while cranking in slack to get the fish on the reel. But when finally the jack is in close, and I can actually see it, the fish has shrunk to ten or twelve inches! Such is the ferocious nature of these exciting sport fish.
Before my saltwater fly-fishing experience began five years ago, I had fly fished mainly for rainbow trout. Just to give an idea of fighting comparison, I believe a ten-inch jack is equivalent in fighting power to an eighteen-inch rainbow. Hard to believe, I know, but try fishing for jacks and I think you will agree. After releasing a pair of these small, but explosive fish this morning, they seemed to retreat into the gloomy depths out of reach of any fly. I hiked back to the casa for black coffee and golden pancakes, hoping as I trudged the cobblestones, that by tomorrow the water clarity would have improved and that I might actually hook a "five pound" jack longer than ten inches.
ads4 ads5
↑↑↑
OPEN