The King of Snook Fishers 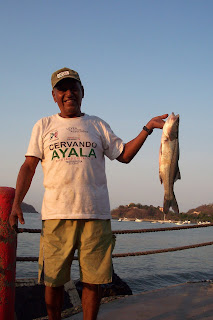 July 24.
While roaming Playa la Madera and occasionally peering low over the wave tops for the telltale swirl of jacks behind the break, I spotted Gregorio fishing from his favorite rock. He pointed to his nylon catch bag on the beach. The bag suddenly leaped sideways, and Gregorio gave a barking laugh. I trotted across the sand and jerked the bag open. Inside were two snook of about five pounds each, one still exploding with big sea energy.

I had first met Gregorio three years ago while fishing for jack crevalle along Zihuantaejo's Fisherman's Walkway. A compact, copper-skinned Mexican, likely in his late sixties, Gregorio was playing a bull of a fish on a handline. Barefoot, he half squatted on a surf-pounded rock, his leathery hands pulling monofilament line from the sea and dumping it at his feet. Several times he got a bunch of coils on the rock, and then the powerful fish would take it all back in a long chugging run. Finally, he worked the exhausted fish in close and scrambled from the rock to the sand. A sizable wave rushed onto the shore. He placed the line over his shoulder and trotted up the beach. The wave fell back. A gleaming arm-long fish lay on the beach, maybe fifteen pounds. I was to learn that the fish was a Robalo (Roh-BAH-lo), called snook in the states.

Since that morning I’ve seen many snook in Gregorio’s catch pouch and have caught a few myself. Most of mine were a bit shy of that five pounder I saw thrashing around in Gregorio's bag. But Gregorio, using his handline and homemade lure has stuffed twenty-pound monsters into that sack. He states in a Forrest Gumpish kind of way, you never what you’re going to get out of Zihuatanejo Bay.

The snook is a silver brawler with the torpedo shape of a salmon or trout except with larger fins and an under-slung lower jaw. The most prominent physical characteristic is the lateral line, a sharply drawn black strip running from head to tail. Snook have no teeth but are equipped with rough sawtooth jaws and scalpel-like gill plates that quickly bring to an end most battles not begun with a heavy shock leader. For this reason, Gregorio attaches a six-inch length of steel wire between his fly and his thirty-pound monofilament line.

Raised by a fly-fishing, trout-chasing father, I remain loath to resort to steel leaders, but of course, I’m not fishing to provide food for the table. Steel messes up the cast and often causes a splash. I like the slick presentation of a tapered leader. A nice cast just feels good, and even in big, rough water, I believe a gentle landing improves the chance of a hookup. You 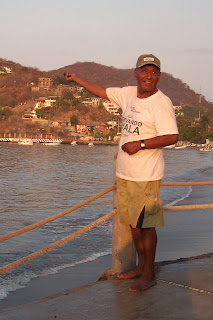 don’t need a long tapered leader; three, two-foot lengths of diminishing diameters forming a six foot leader will do. But when fishing for snook, I tie a half-foot length of twenty-pound monofilament at the end of my twelve-pound tippet and then tie on the fly. This shock leader dosen't always thwart the snook's saw-blade jaws, but it withstands the cutting action for a while. The trick is to land the fish as quickly as possible. Snook are generally found in murky water so the thicker shock leader following the tippet seems of no consequence.

Spawning snook are in the bay April through September following ageless instincts that hark back thousands of years when their preferred local spawning ground was a brackish gloomy swamp that is now the thriving beach town of Zihuatanejo. Even now the streets are sinking! I’ve noticed that construction workers dig a hole most anywhere downtown and often hit water only a few feet down.

The snook return each year in May and June, likely still seeking that long-gone swamp. Now, however, they must be satisfied with spawning in the silt-laden water off Playa la Madera and Playa Municipal, and I am told, in the deepest parts of the bay.

Spawning snook are one of the marvels of the natural world; near sundown on the new and full moons from May through September, the fish congregate in a location where below surface currents are strongest. Near sundown, the males surround the females and bump them until they release their eggs and then the males provide the sperm. The free-floating eggs run seaward with the falling tide. About eighteen hours after spawning, the eggs hatch on the incoming tide. The fry make Zihuatanejo Bay their home until fingerlings and then venture out into the big sea.