"Fly Fishing" is a Misnomer 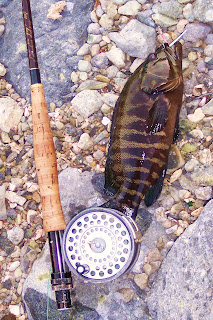 June 6.
In the chronicles of fly-fishing, a fly is an artificial lure constructed of feathers, hair, tinsel, and thread. As the term suggests, the resulting lure imitates an insect. When fly-fishing saltwater, the word fly is a misnomer. The saltwater fly-fisher attempts to match the fly to the length, shape, and color of small fish rather than insects, and then swims the fly among local bait fish in the hope that a larger predator will attack the imitation.
Diving sea birds tell of bait fish, but often these schools are far out into the bay, unreachable by the shore angler, so avid fishers search beaches for telltale hollows in the sand beneath the surf, and investigate rocky shorelines and weedy bottoms—all reliable sites for bait fish and the large predators that dine on them.
The rocky far end of Playa las Gatas is such a place. Minuscule crustaceans washed off King’s Reef and carried by tidal action appear constantly along the rocky shore in front of Las Gatas Beach Club. Bait fish dart about snapping up these tiny meals, and the big predators—jacks, barracuda, Cornet fish, Cabrilla and needle fish—lurk about to snap up the bait fish. Successful angling generally peaks at dawn, holds steady for an hour or two, and then dwindles as the bait fish, under constant attack since first light, disperse to the gloom of deeper water, predators in hot pursuit.
ads4 ads5
↑↑↑
OPEN